Selected for induction in the individual category were:

Terry Pruemer, Meritorious Service/Player, Mode, Illinois……Made his mark in softball as a pitcher, business manager, promoter and organizer of Illinois ASA Softball.  Terry ended his involvement in ASA softball as business manager of Tate Farm equipment.  Also served in that role for Effingham Bonuttis.  Prior to his administrative work, Terry pitched for several teams including Tates.  His greatest accomplishment was leading the Tates team to the 1989 state championship.  For his efforts, he was named the Most Valuable pitcher in the tournament.

Tracy Petersen, Women’s Slopitch Player, Benld, Illinois…….A key member of perhaps the most successful and dominant women’s slopitch team in the history of Illinois ASA.  The Belleville Whiz Kids won ten Illinois ASA women’s major slopitch state championships.  The team also finished 2nd in the 1989 ASA National Tournament.  Tracy played 12 years as the first baseman for the Whiz Kids.  During her tenure, she was selected all state in 1986, 1988 and 1996.  She was the most valuable player in the 1986 state tournament.  She played her collegiate softball at McKendree College where she was an academic all American in 1987.

James Noffke, Mens Fastpitch Player, Strasburg, Illinois…Started playing for Tates Farm Equipment in 1976 before switching over to Decatur ADM in 1984.  An outstanding left hand hitter, Noffke played the outfield and caught for ADM.  After a sterling  career for ADM, James had his number retired by Decatur in 1992.  Ended his career by returning to his original team (Tates) in 1995 but not before accumulating several Tates records including most games played, most at bats and most doubles in a season.

Mike Hayes, Meritorious Service,  Decatur, Illinois…Mike was a prominent fixture on the Decatur softball scene for approximately15 years.  Along with a few others, he started the Central Illinois Girls Softball Association.  He quickly became the go to guy in the organization.  During his tenure, he developed CIGS into one of the largest girls softball organizations in Illinois.  He also coached and managed the Decatur Sting and  helped Decatur host the ASA Women’s National Tournament in 1991.  His women’s teams eventually would garner three top ten finishes in the women’s major national championships.

Marty Cloe, Mens Fastpitch Pitcher, Tower Hill, Illinois…..Marty was a long-time mens fastpitch pitcher for several teams.  His greatest success came when he signed to play with the Vandalia Freight, a team he helped become a two-time National Champion and three-time Illinois State Champion.  He pitched 248 games for the Freight, winning 166 and losing only 45,  He was a six-time all-stater and was the MVP in the 2007 state tournament.  In addition, he was an ASA all-american in 1999 and 2005.  An excellent hitter, he often batted in the middle of the Freight lineup.

Ken Thaxton, Umpire, Prescott, Arizona…….Ken was an outstanding ASA umpire.  His illustrious career spanned 24 years, 1972-1995.  For seven of those years,  1989-1995, Ken served as the Illinois ASA state umpire-in-chief.  During his career, he  worked five mens fastpitch national championships and was assigned to work the plate for the championship game four times.  He also worked the Pan American games in 1987.  Ken was a member of the National Indicator Fraternity and was an International Softball Federation Umpire.  Ken was the 1987 recipient of the Illinois ASA Don Plarski Umpire Award.

Michael “Bo” Bohannon, Slopitch Player, Charleston, Illinois…….”Bo” was a power hitting outfielder for Effingham Turner Trucking, a team that finished in the final four in the Illinois ASA State Tournaments of 1990, 1992, 1994, and 1996.  His career began with the Toledo Bank team but he switched to the Depoister Drilling/Turner Trucking team in 1989.  That began a nine year tour with Turner during which time he compiled a .657 bating average. In  1996 he had a single season high of 175 home runs, 410 RBI’s and a .764 batting average.

Brad Sturdy, Fastpitch Pitcher, Dawson, Illinois…….Brad pitched and played fastpitch softball for almost 20 years.  Playing for seven or eight different teams, he made all-state eleven times and was MVP in the Illinois  State Tournament in 1992, 1998, 1999 and 2011.  He closed his career playing for the near-legendary Vandalia Freight.  He was a key pitcher for that team,  a group that won two national championships and three state championships.  Brad was selected all-american at the ASA National Tournaments in 2000 and 2007.

Jerry Detloff, Fastpitch Player, Bloomington, Illinois…….Began his 13 year ASA softball career as a teenager in the mid-1950’s with the Bloomington State Farm Chiefs.  Played shortstop and outfield for a team that won the West Central Regional in 1955.  He then signed with the Laesch Dairy/GMC Trucks in 1957 and stayed with them until his early retirement  at age 30 in 1968.  He was an all state 3rd baseman in 1965 and in 1966 he led the GMC Trucks to a 3rd place finish in the West Central Regional with his tourney leading .385 batting average.  He was a middle of the lineup power hitter until switching to the lead-off spot late in his abbreviated career.

Ron Ohnesorge, Slopitch Player, Altamont, Illinois …..…..Part of the two-man slugging duo known as “Bo” and “O” for the outstanding Turner Trucking slopitch team of the 1960’s.  Turner Trucking compiled a nine year record of 737 wins and 154 losses.  The team finished 4th three times  in the  Class B State tournaments and 4th in the 1992 Class A Sate Tournament in Alton, Illinois  The well-built, stocky Ohnesorge usually hit 3rd or 4th behind his buddy, Mike “Bo” Bohannon. 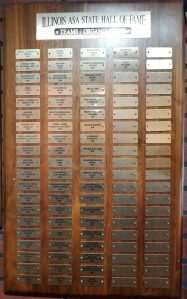 The following teams/organizations were also voted to be inducted into the Illinois ASA Hall of Fame:

This entry was posted in Home, Illinois ASA Hall of Fame Inductees. Bookmark the permalink.